A different kind of normal 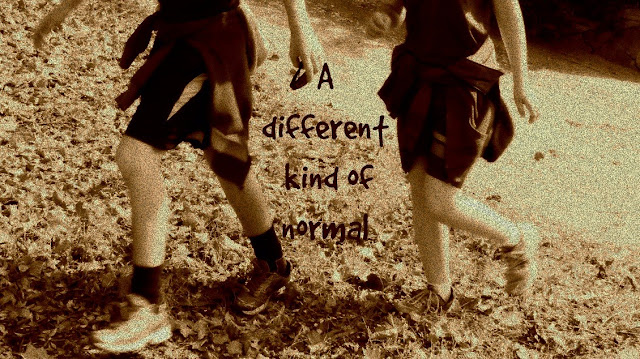 So today I want to be a bit nerdy and talk about bell curves and IQ and levels of giftedness, because those things are impacting on my kids, and as a result, on us as a family. And I think we need to talk about these issues because sharing is caring, right? And I know that if I know someone else is going through the same sorts of things that we are, I feel a bit better. A bit more "normal". Whatever the hell that is!

And therein lies (today's) problem. Most of the population falls within the "average" range of intelligence. And most people think of "average" as "normal". Those people in the middle of the bell curve are not significantly different from each other. They find it relatively easy to find people to whom they relate, who are similar to them in their thinking. 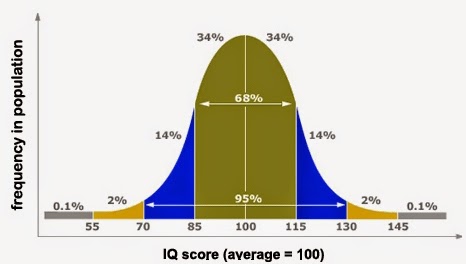 If you are in the top 1% of the scores, the range of scores (from about 135 to over 200) is as broad a range of scores as is encompassed from the 2nd percentile (IQ 64) to the 98th (IQ 132). In terms of intellectual capacity, a profoundly gifted child of IQ 190, differs from moderately gifted classmates of IQ 130 to the same degree as the latter differs from intellectually disabled children of IQ 70 (Miraca Gross - Exceptionally Gifted Children 2004).

But IQ scores are no longer derived from a ratio, they are scored on a curve, so we don't get the fine detail of the upper end of the spectrum. For those that think in pictures, here's a close-up: 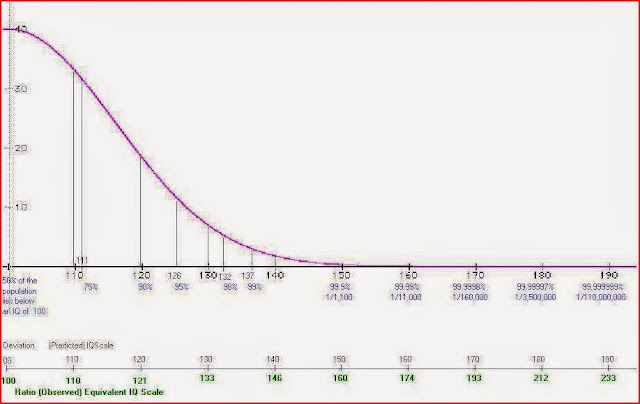 Now I'm not saying how far my kids are to the right or that curve. We don't really know HOW gifted they are because the newer IQ tests don't test that high - the waters start to get muddied around the 140-145 mark. Those scores of 160, 170, 180, 190, 200, 200+ plus are derived from an older IQ test that doesn't get used much now (the Stanford-Binet LM form - check out info on IQ tests and what they mean for highly gifted +  here). We do know that they are in that grey area from the top graph. Somewhere on that line that contains very few people on the bottom graph.

My point is, they ARE different to the vast majority of the population. Maybe really, really different. And note I said DIFFERENT. Not better. Their brains are wired differently - their intellectual capacity lets them learn differently, faster, with a desire to think more complexly than the rest of us (probably myself included).

Is is any wonder they feel "abnormal"? Add the fact that they both experience Executive Functioning Issues. Also add in that with high intellectual capacity, usually comes high emotional intensity.

I feel sad that (at least) one of my kids considers themselves "abnormal". Because that means they think of themselves as something annoying or bad - the negative connotation usually associated with abnormal, whereas all they want to feel acceptable or good. What I want for them (both) is to consider themselves as part of the big normal, a different normal, but normal nonetheless. I want them to know I will do everything I can to nurture their potential and their intensity, but I also really want them to believe in themselves.

This teenage business is hard enough - finding your authentic self in a sea of hormones, peers, media and family. Tough times, people! Most of us would not go willingly back to those years! And here they are also dealing with being fundamentally different from those peers.

How do we deal with this? A LOT of patience, tea and tissues, I find helps. Knowing that this too shall pass. Talking about what being different means. That in this case, yes, it's different and not easy, but it's not a bad thing. Taking the pressure off - no expectations of cures for cancer here! But talking about what the differences are and why they are just different, not worse or better for that matter. Just different.

A different kind of normal.

Time for a change 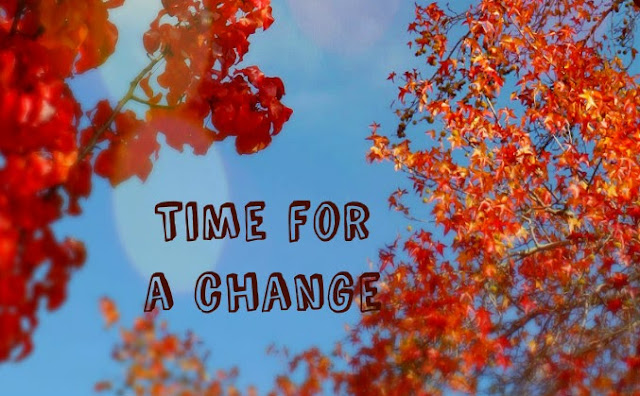 A little while back, I wrote about wanting to change my job situation. I'd had enough of being a travel agent. I mean, we wanted to move to Canberra, I applied for lots of jobs and I got that one. Actually, I applied to work in Cruising, but ended up in a normal travel agency. And so (because I am a good girl), I said to myself "I will give this 6-9 months and see how it goes". Note to self: if you are already giving yourself a timeframe, be wary - trust your instincts - run now.

I was mentally and physically very unhealthy.

I said to Hubby this morning (who noted what a good mood I was in and wanted to know what drugs I was taking) that I have been in a bad mood for the last 12 months! Just because I can sell travel, doesn't mean I want to.

The hours were long. The pay was CRAP (even if you do well). I was over trying to sell, sell, sell. I didn't fit in. I'm really not a details person - I can do it 90%, but the minute details? Don't care. And that's kind of not OK if you are trying to fly people all around the world.

So, I've been applying and applying and writing lengthy job applications addressing many, many selection criteria. And I've had interviews.

And I have a new job!

I'm going to be a Program Manager as part of Inspiring Australia! Their role is to ensure:

I will be working on:
Pretty cool, huh??

Bonus! It's only 3 days a week and I get paid a fair bit more than I was working (more than) full-time in travel!

Extra bonus! A while back I applied to CSIRO Discovery for a role and I came second (boo). But they rang me and would like to know if I'd be available for a bit of casual work, running workshops for schools! I do my first workshops next week.

I can't tell you how happy I am. Such exciting work to look forward. Work that I'm well suited to, work that is interesting, work that makes a difference.

So, another big change! I'm having a couple of weeks off to catch my breath, and do fun stuff like last year's tax, pap smears and take the dog to the vet to get the cyst on his neck fixed up.

But also to enjoy the glory of Canberra in Autumn. We went for a walk the last weekend up Mount Taylor. Why my husband insists on dragging his very overweight wife up MOUNTAINS is beyond me. But I made it. And I suppose it was worth it ;-) 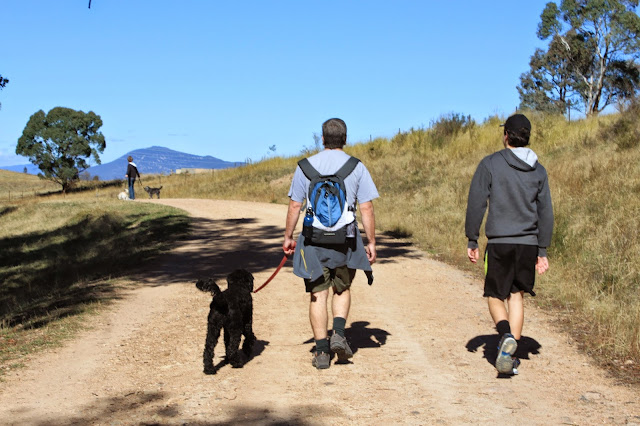 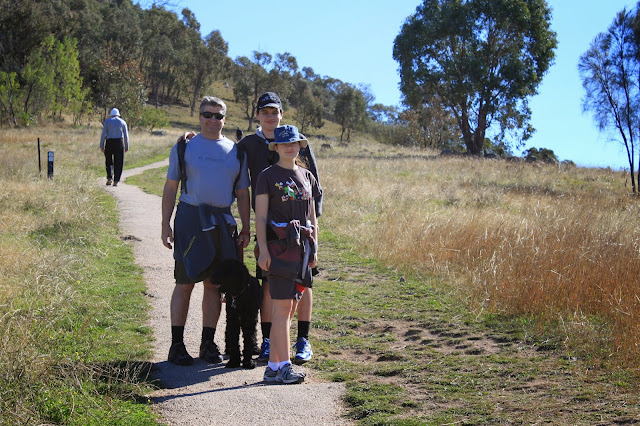 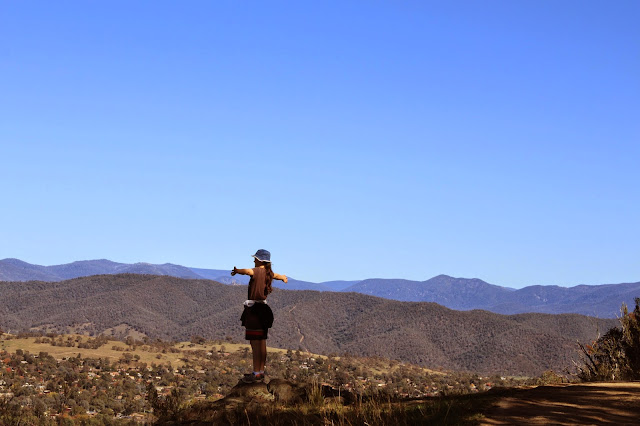 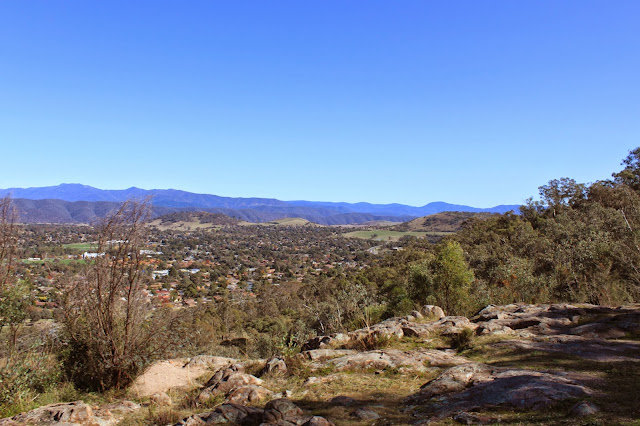 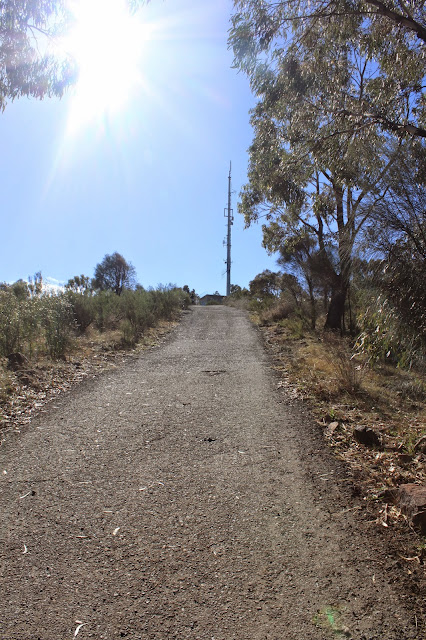 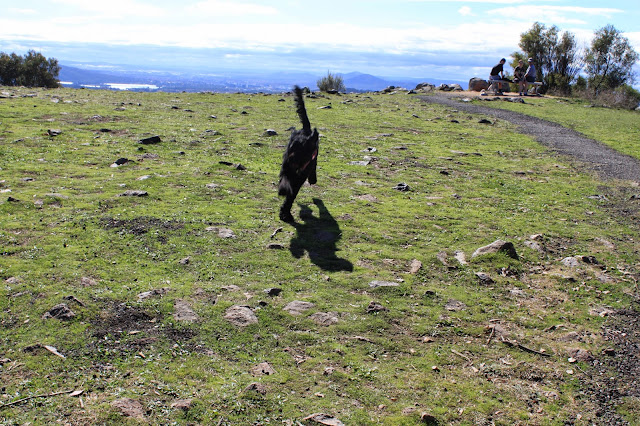 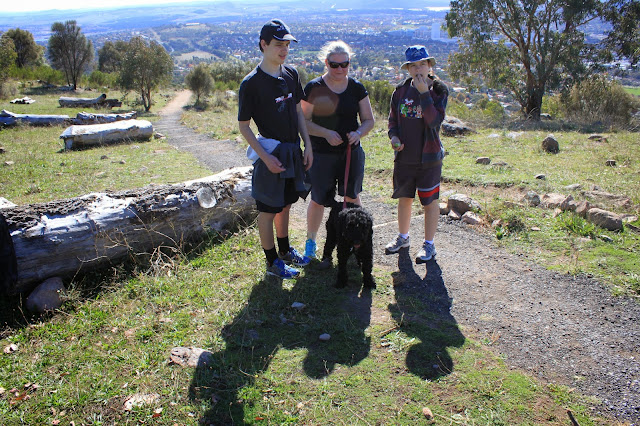 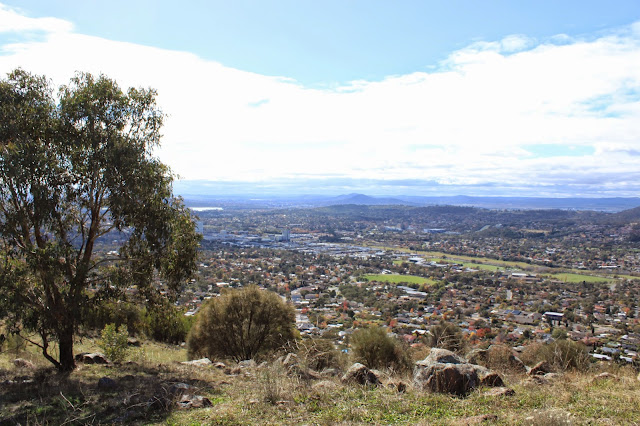 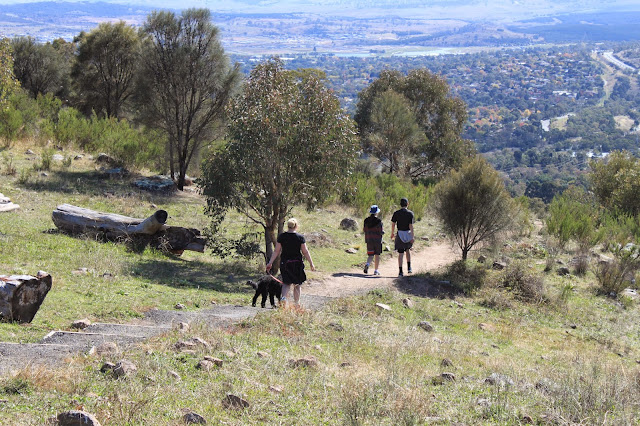 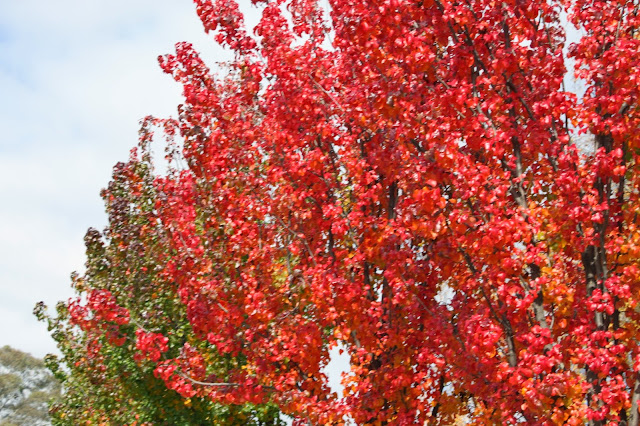 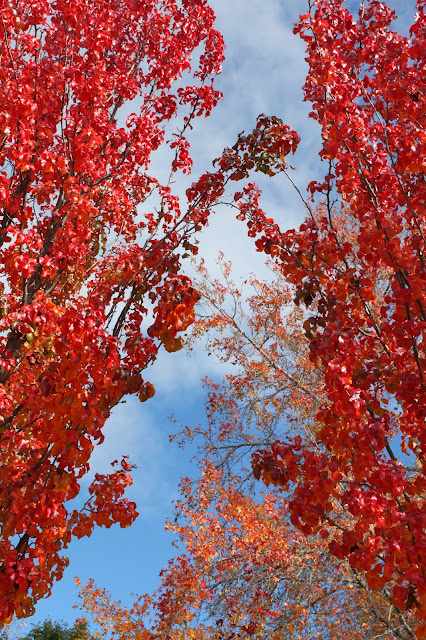 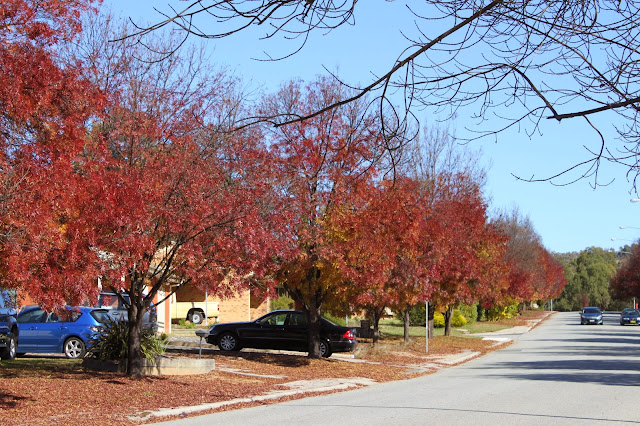 I feel like I can breath out again now. A change is in the air, and not before time.

Is autumn pretty where you live? We are loving the seasons in Canberra!
Need a hand with resume writing and job applications?
Got any good news to share?

Homeschool to High School? Yes we can!

I know I wasn't alone when I was homeschooling, wondering if I was doing "enough". Especially "enough" if the kids ever wanted to go back to school. Because...what if...GAPS!!!!???

...where you learn mostly by discussing things

...you watch a stack of documentaries about <insert favourite topic here>

...it is all getting a bit too much, so you take the dog and the kids for a walk around the block/down the beach/to the park

...you worry about how late your teens are sleeping

...you have concerns about the lack of "written work" (aka "school work" or "book work")

...you spend the entire day reading novels (that aren't prescribed on some kind of list)

You know, those days!

Well, we ALL worry that "those days" and not doing "enough" are somehow going to ruin our kids education. Go on, admit it. You're a bit worried!

We had our first parent-teacher interviews this week, since going back to school. I have to warn you, I wasn't looking forward to them because back in the day, before homeschooling, they usually weren't pretty. There was a lot of "well, Video Boy is obviously smart...BUT..." and "well, Wombat Girl is obviously doing well in maths, BUT..." (so many BUTs).

So it was with a slightly wary air that I found myself in a school hall, searching for name tags that matched up with the names on the paper list. BUT I was pleasantly surprised!

"Video Boy's knowledge base is amazing"

And you know what? That means I can breathe out. They HAVE settled well back into school. They are getting on well socially ("you can't even tell they've been homeschooled!"). They are doing well (great, even) academically.

You know what else? That means that homeschooling CAN work. And even though it doesn't "look" like school, they are still learning. Learning lots (more!) and setting themselves up well for future study (if they want to). 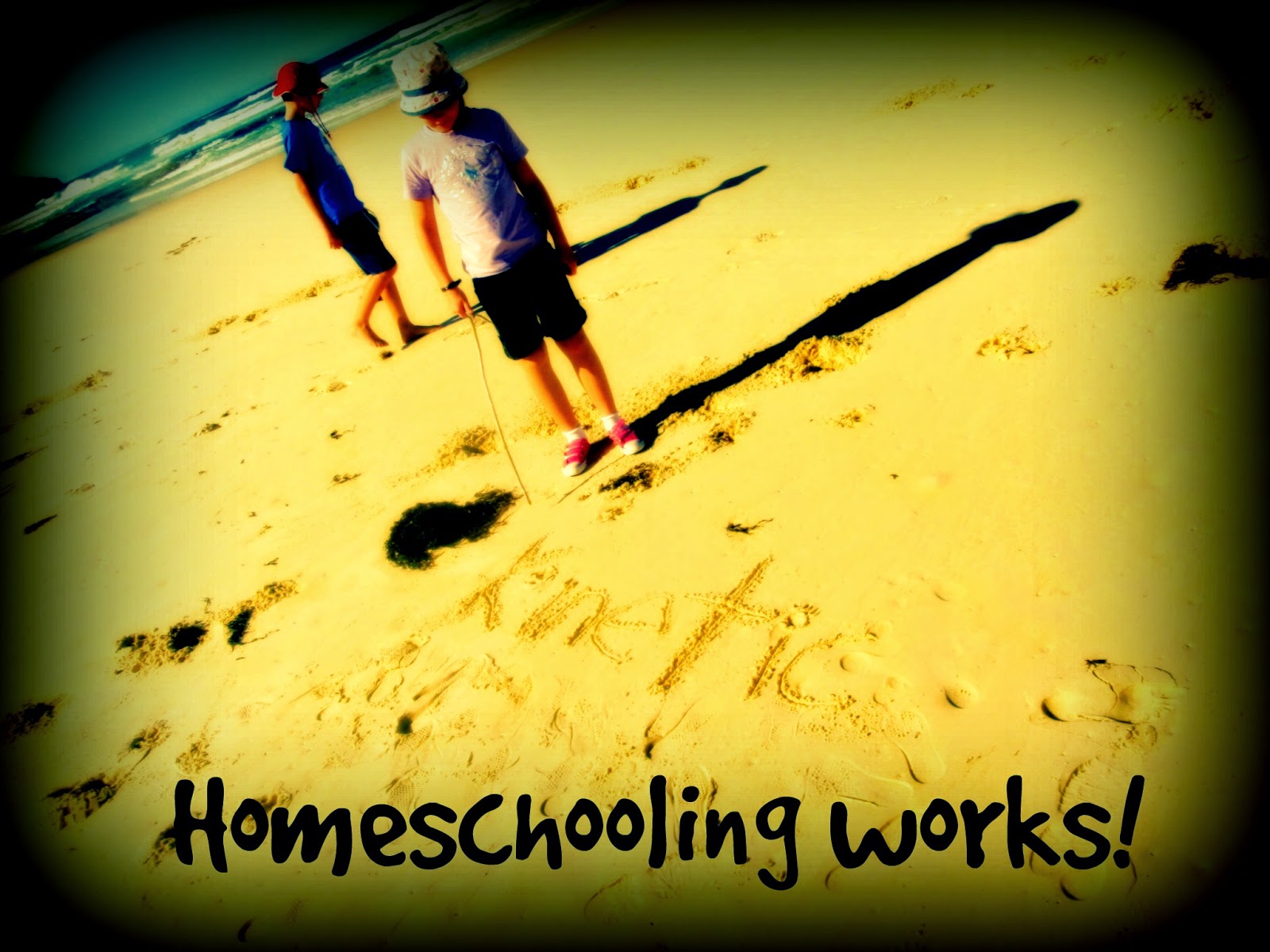