This week's #52ancestorsin52weeks is Father's Day - but of course, it's not Father's Day in Australia, so I'm going to do the theme we had a couple of weeks ago when I was away - So Far Away.

When you first start doing your family tree, it's exciting to see how "far back" you can go with your branches. Until last weekend, the furthest back on my direct line was Benjamin Broome, my 9th great-grandfather born in 1646 in Kidderminster, Worcestershire, England (grandfather of John Broom in my carpet story), which I thought was a long way back!


Well, things were starting to get a bit boring with all this Gloucestershire business, when up pops his father, Thomas Walraven van Arkel Heukelom - who was born in 1613 in Ammerzoden, Gelderland in the Netherlands! He must have migrated at some stage because he married Mary Willets in (you guessed it) Gloucestershire in 1638. I wonder what made him move?

Those Netherlands people keep good records because this opened up a HUGE branch of the family tree and links us back to medieval nobility because it turns out the van Arkels were a medieval noble family from Holland! Was I excited? You bet I was! I can trace the van Arkel paternal line back to good old Herbaren van Arkel II born around 1200, somewhere in the Netherlands. He is my 20th great-grandfather!

This post could get bigger than Ben Hur (and possibly I am related to him too), but it gets too confusing and too hard to keep track of everyone. So I'm just going to run through the most exciting branch (and there are lots more posts with other branches just waiting for their story to be told too).


I kept going back along the branches, amazed there was so much information going so far back.

My good friend Google informs me that the van Lynden's were nobility too, one of the oldest Dutch noble families!

As an aside, if you can see Lady Agnes van Herlaer in the diagram above (my 18th great-grandmother), she is also Princess Diana's 18th GG, Winston Churchill's 18th GG and some other royals who aren't as famous 18th and 19th GG!!! Me and Diana - blood relatives!

Anyway, I kept going, tracing, finding lots of coats of arms and counts and countesses...

...and going, where lo and behold old paintings of Dukes start popping up and we start to get a French and German flavour happening:


Kunigunde de Francs de l'Ouest (Cunigunda of France) was born in Aachen, Germany in 886. Her mother was Ermentrude of France was born in about 870. Her father was Louis the Stammerer, King of Aquitaine and later West Francia, born 1 November 846.

His father was Charles the Bald, King of West Francia, King of Italy AND Holy Roman Emperor, born 13 June 823. Guess I'm a good Catholic after all.

His father was Louis the Pious (also known as Louis the Fair and Louis the Debonair), King of Francs and also co-Emperor, born in 778. Debonair. Of course he was.

And for today, we come to the end of this line - he was the only surviving adult son of Karel I de Grote der Franken - otherwise known as Charles I or Charles the Great or simply Charlemagne, born 2 April 742. He was King of Franks, King of Lombards, and Holy Roman Emperor. He united much of western and central Europe in the early Middle Ages and was also known as the "Father of Europe". He is my 35th great-grandfather!

I know we can go back at least another generation, but for now, I am happy to be related to this famous figure of history and to be back to 742 AD and 35 generations! That is So Far Away, I think!
at June 16, 2018 No comments: Links to this post

52 Ancestors - Going to the Chapel

This week's theme for #52ancestorsin52weeks is Going to the Chapel. Behind every good wedding is (should be?) a good love story. This week we are are close to home in terms of ancestors, but the Chapel certainly wasn't...

...Once upon a time, there was a young woman called Heather Hardwick. She was working at King George V Memorial Hospital at Camperdown, in Sydney, as medical record librarian. Mutual friends from the hospital invited Heather out of drink in a pub down at Circular Quay. It was here that she met Ted. They went out for a couple of dates, but it wasn't Ted that would walk her down the aisle!


Ted was friends with Laurie Butler (or "Butts", as we know him). The boys were very excited because "Stiffy" was coming home on leave from New Guinea. Now I have it on good authority that Terry Sedgwick gained the name Stiffy at school from Butts because of his propensity for drawing skeletons. If you thought any different, get your mind out of the gutter!


Anyway, they all went over to Butts' place at Carlton, where Heather met Terry. They got on well and saw each other a few times until it was time for Terry to go back to work at the Post Master General's office in New Guinea. Heather wrote to Terry for over a year, until her holidays came up. 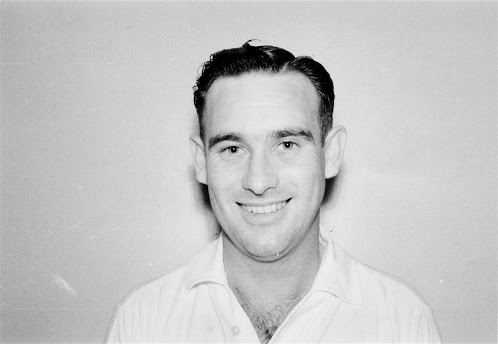 Terry asked Heather to come and visit her. "I can't go to New Guinea! I've never been out of Australia!" she protested. Terry must have worked his charms because next thing you know, Heather had met his mother Cora and then was being seen off at the airport to head off to the wilds of Rabaul in New Britain, Papua New Guinea (March 1963). 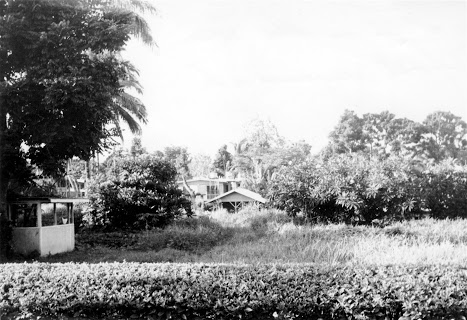 Things must have gone well up in New Guinea, because when it was time to go back home, Terry's friends up there implored Heather not to leave him alone, because "he needs you up here!" And so a wedding was planned!

Cora was a dressmaker and asked if Heather would like it if she made her wedding dress and Heather agreed. Cora made a toile mock-up of the dress from a pattern and sent it up to New Guinea, where adjustments were made and then it was sent back and the final dress sent back. Heather still has the pattern and a bit of the lace (side story - her kids wrecked the dress using it as dress-ups when they were little!). 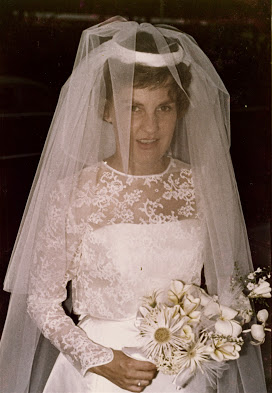 Anyway, the big day arrived and the dress was ready. There were no relatives at St Francis Xavier Catholic Cathedral at Rabaul on 18 May 1963, which, quite frankly, is an impressive 'chapel' for the back blocks of New Guinea in the 1960's! 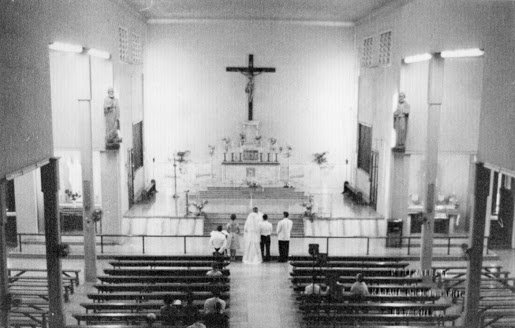 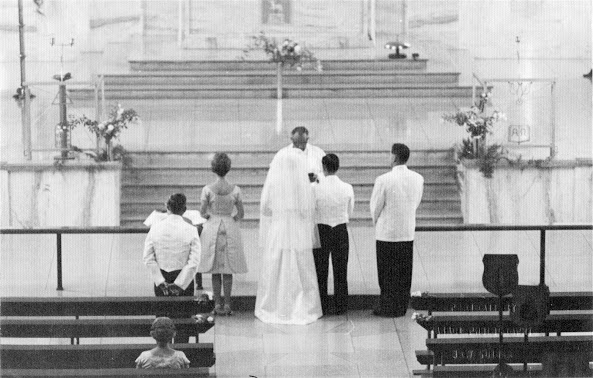 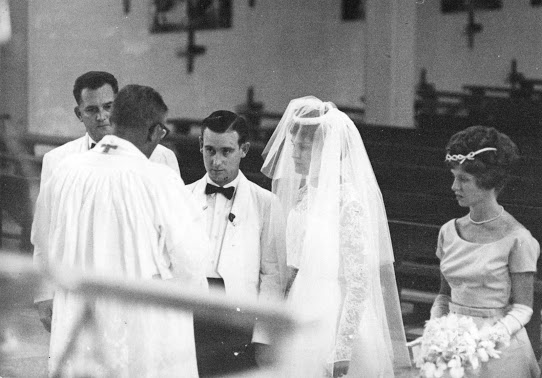 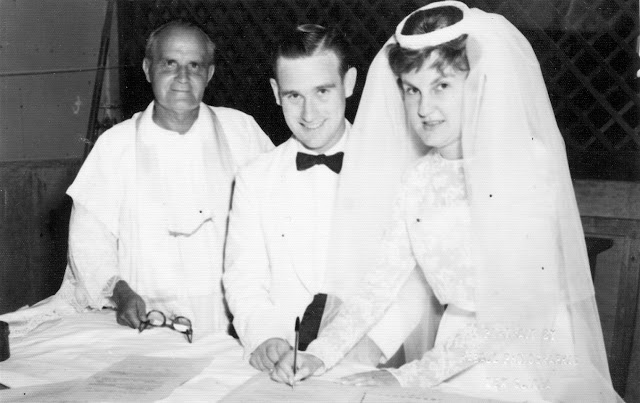 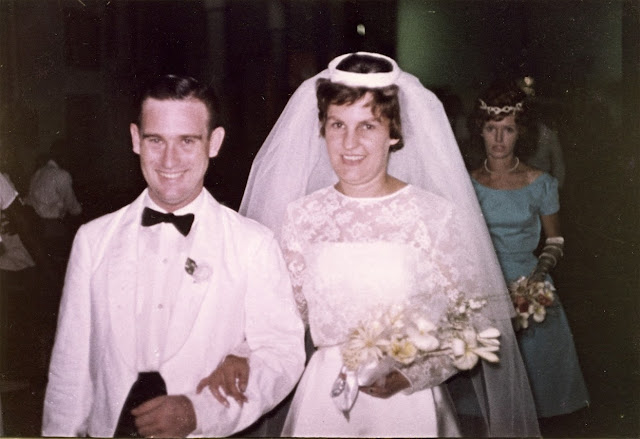 Despite the lack of relations, the wedding party went off without a hitch and a good time was had by all. 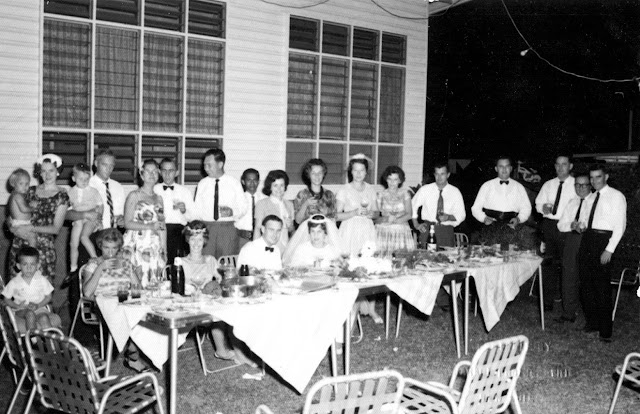 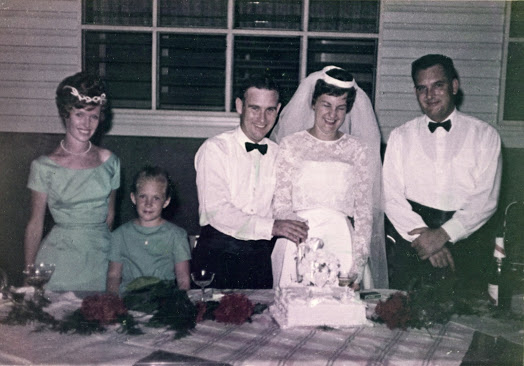 Heather and Terry lived in Rabaul until October 1963 and then Port Moresby until they returned to Sydney in January1965 (when things started to deteriorate). 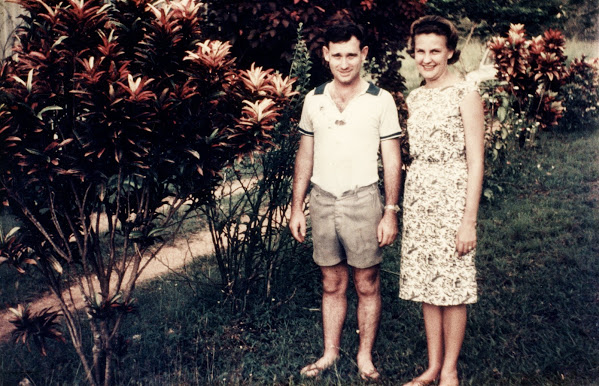 In a case of things travelling full-circle, I went to New Guinea on a cruise in May 2017 and we stopped in Rabaul. I got the tour bus we were on to detour to St Francis Xavier's and despite the time difference of almost exactly 54 years and the ravages of volcanic explosions that damaged much of Rabaul in 1994, the Cathedral still stands (albeit with new roof). It was surprisingly very emotional being in the exact spot Heather and Terry got married all those years ago: 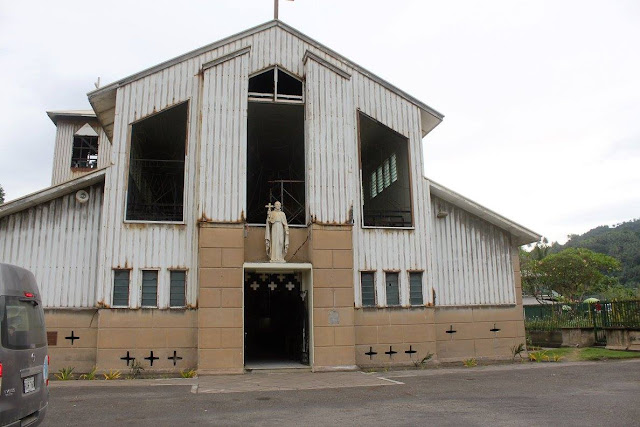 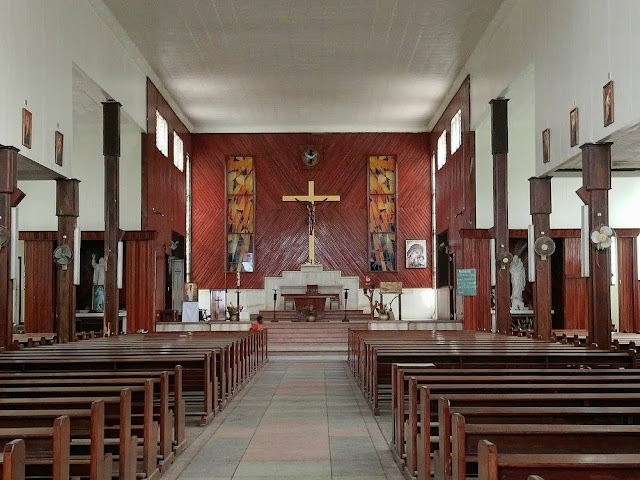 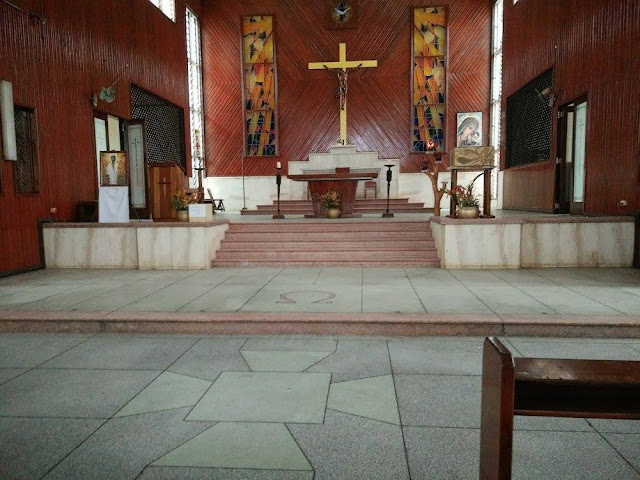 Heather and Terry are my Mum and Dad (just in case you hadn't worked that out). I love their love story and you'll be glad to know they were happily married for 46 years before Terry died in 2009. They continued to be adventurous, living on a houseboat at Cammeray, a caravan in Coffs Harbour as well as Blacktown, Kogarah, Brighton-Le-Sands, Tasmania, Batemans Bay and Ulladulla! I think their love can give us all hope for love! 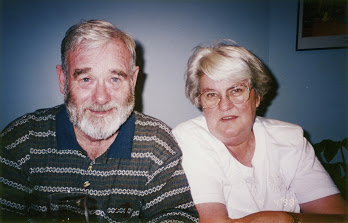