Well, this week's theme on 52 Ancestors is "Storm". Last week was "taxes" and try as I might, there was nothing I could come up with, so I had a week off. I nearly did the same this week, but as I was doing a bit of research, sure enough, we have a thunderstorm going on, so I'm going to draw a very long, tenuous bow...

John Broome is my 7th great grandfather. He was born in 1710, in Kidderminster, Worcestershire, England. Now this place is interesting because a) Worcestershire sauce! and b) Kidderminster is considered the home of the first machine-made (as opposed to hand-made) carpets.

Kidderminster had been a textile producing town since medieval times. By the 17th century, Kidderminster cloth was the only textile industry to survive and flourish because of the town's ability to adapt to changing needs and tastes. Already famous for its broadcloths, the town rapidly became famous for producing what was known as "Kidderminster stuff" which was mainly used for bed coverings and wallhangings.

As it turns out, John Broom(e) and John Pearsall were "stuff weavers" and are credited as being the first weavers of "Kidderminster" carpet in 1735. It was a coarse, flat weave, woven with mainly woollen yarns, patterned with the design visible on both sides, so it was reversible. They were not floor carpets in the truest sense, but more like wall hangings. Known as "Ingrain", they later became known as "Kidderminster" and later as "Scotch" as the process was exported to Scotland. It was cheaper than hand-woven carpets and instrumental in bringing carpet to the wider market. 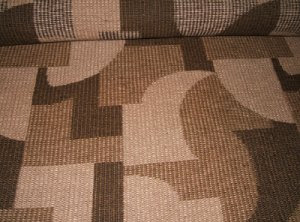 Apparently, John Broome was quite the entrepreneur and in 1749 he travelled to either Brussels, Tournai or Wilton, where he "borrowed" the plans for a new type of loom and brought with him immigrant workers.

Up until then, they were always keeping an eye on their hand-loom competitors in Scotland, Axminster and Wilton. Kidderminster is located on the River Stour, and then the opening of the Kidderminster canal gave them access to the rest of the world and Kidderminster became the "Carpet Capital of the World".

As carpets became larger and more ornate, it became necessary for larger looms to be used and they could not be housed in individual weaver's homes. Some carpet factories were converted from other textile factories. In 1832, the carpet firm of John Broome (John Broome's son and my 7th great uncle) went bankrupt.


What's all this got to do with storms, I hear you ask? Well, I was researching the Hardwick tree (my mum's dad) during this storm this morning, and they were all from around Kidderminster too. In fact, Effie Clara Broome (my Great Great Grandmother) who married Arthur John Hardwick Snr is the direct descendant of John Broome Snr and they both lived in the area, but immigrated to Australia separately, where they married in Sydney in 1887.

So, a pretty long bow to "storms" but a fascinating story and a really interesting part of my family tree!

Email ThisBlogThis!Share to TwitterShare to FacebookShare to Pinterest
Labels: #52ancestors, 52 ancestors in 52 weeks