Well, after a super-busy day at Dunedin, our next port of call was Akaroa. Usually the ship stops near Christchurch at a port called Lyttleton, but the wharf is still damaged from the September 2010 earthquake and the February 2011 aftershock. So the cruise line moved the stop to Akaroa, a 75km south of Christchurch.

Akaroa is a little coastal village with French and British settlement history. Much is made of the French influence in town, but it is a pretty village in its own right. The town is based on the rim of an ancient volcano, making a perfectly beautiful harbour, which is unfortunately, too shallow to let the ship dock at the wharf, so we had to get on the tenders or little boats which ferry you across from ship to the wharf.

We didn't have much planned in Akaroa, except wandering around, so we slept in and had a late breakfast. Meanwhile, announcements were being made that given the high winds, the tender boats were having trouble keeping "still" for passengers to get on and off, and that this was slowing the loading time of passengers, so the wait to get on a tender was over an hour.

No stress. We went down, collected a ticket and settled back to read our books and wait for our tickets to be called. Meanwhile, another announcement was made that the delays continue, the process of using the tenders was extremely difficult and that perhaps people with any kind of mobility issues or sea-sickness would prefer to spend the day in the comfort of the big, stable ship.

Our ticket was finally called close to midday. We went downstairs, stood in the queue. I looked at the boats moving up to 2 metres and my stomach churned. Was there anything that good in Akaroa?? But hubby was upbeat and keen, so I took a deep breath and moved forward.

Until the Captain announced that they were suspending the tender service due to high winds and unsafe conditions. Hubby was furious! Mostly at the (errhm, older) passengers who took so long to get on and off. It is quite clear in the documentation you receive and via the announcements that passengers with limited mobility should not use the tender boats. Yet there were people with walking aids and even a wheelchair trying to get on! Personally, I was little relieved and went to sit with the kids and play card games while hubby cooled off. And before you knew it, they were calling us to try again.

Which we did. We got on the that iddy, biddy tender you see to the right of the picture. The canvas covers had torn, so wouldn't zip up properly and spray (and then actual waves) were coming in the boat. This didn't bother me too much, but some people had umbrellas up inside the boat! The waves were horrendous. I thought the lady opposite me was going to puke all over my shoes - thank God she didn't, because I would have been gonnne! Wombat Girl was terrified the boat was going to capsize, but after a very long 20 minute ride we pulled up at the wharf and were on solid land once more.


The sun was trying to sneak out from behind the clouds, but it was quite cold and very windy! 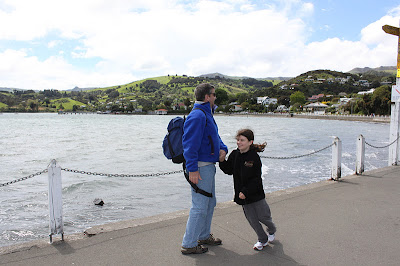 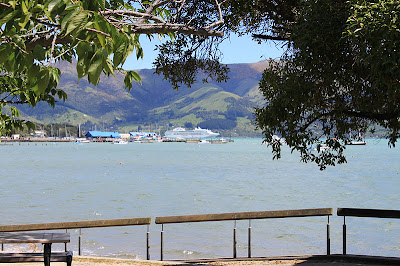 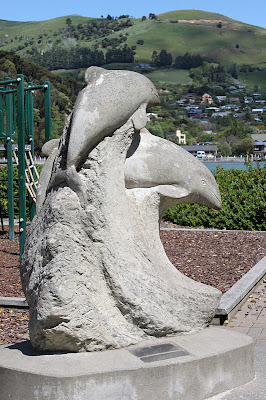 One of the things that can make holidays challenging is spending a lot of time with your spouse! As in, every meal becomes a decision/compromise. Today I thought lunch at a nice little cafe, with maybe a glass of wine, inside away from the wind would be nice. We had fish and chips outside. Which were nice, by the way, but not what I had in my mind.

After lunch we wandered around. My Lonely Planet e-book on the iPad said the walk to the north of the wharf was particularly nice, so we set off.

We found Akaroa Lighthouse a short distance away and the had guided tours. 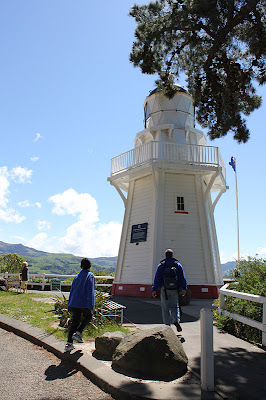 The lighthouse was originally located at the end of the harbour, where ships can see them. But it was replaced by an automatic lighthouse and in 1977 local residents got together and moved the lighthouse in 3 pieces to it's current location overlooking Akaroa Harbour. We were lucky and were the only people there when we took the tour. Wombat Girl got to turn the weight that moves the light. Beautiful view from the top! 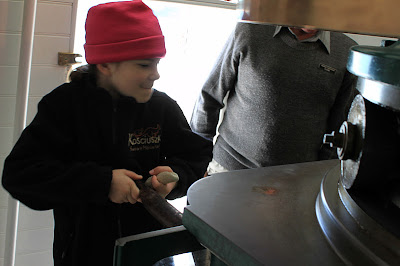 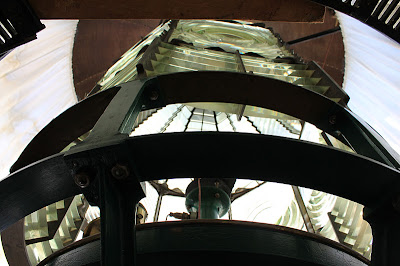 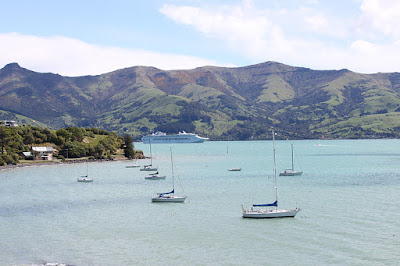 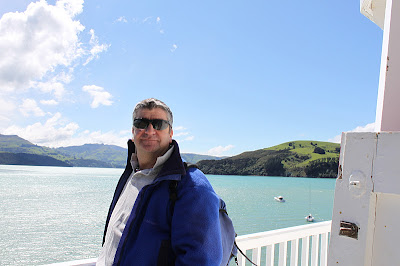 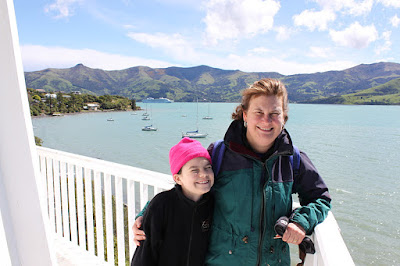 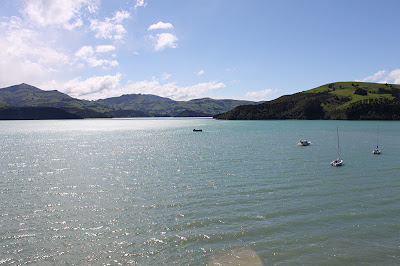 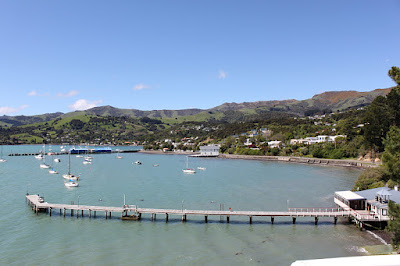 We then went for a walk through the "parklands" located behind the lighthouse. We came across a cemetery, which was really quite interesting and pretty. But it had been damaged in the earthquake and many of the headstones were fallen or unstable. It will take a lot of work to get it fixed up - I wonder if they will? 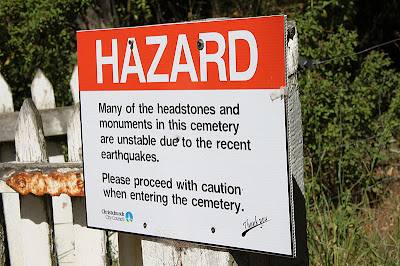 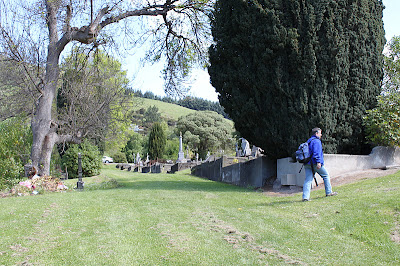 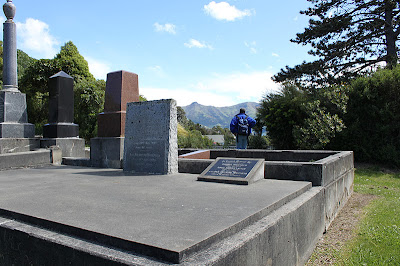 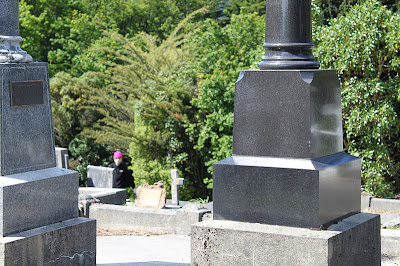 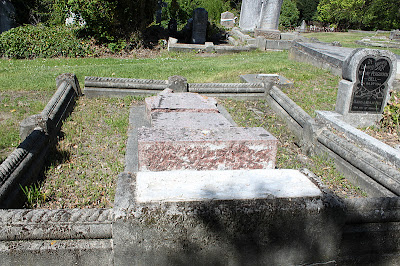 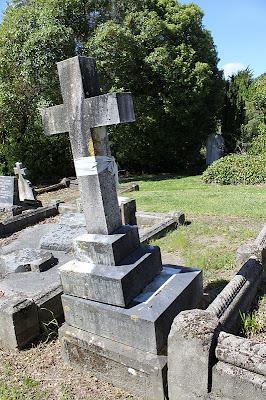 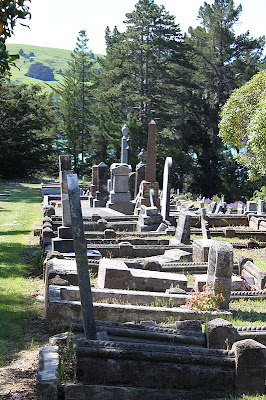 We went for short "bushwalk" after that - I am fascinated by the grass in New Zealand that has little flowers all through it - we don't really have that in Australia! 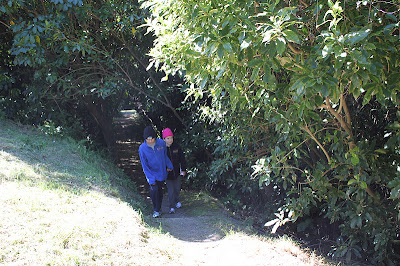 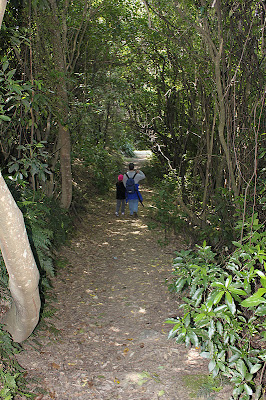 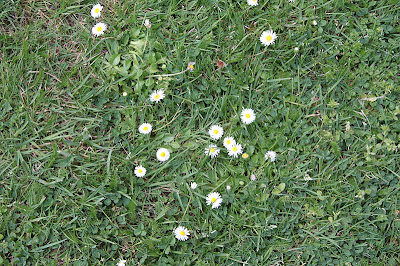 You will be pleased to know the tender ride back to the boat was much calmer, the winds having dropped significantly, but it was pouring rain!!! New Zealand really does have four seasons in one day!